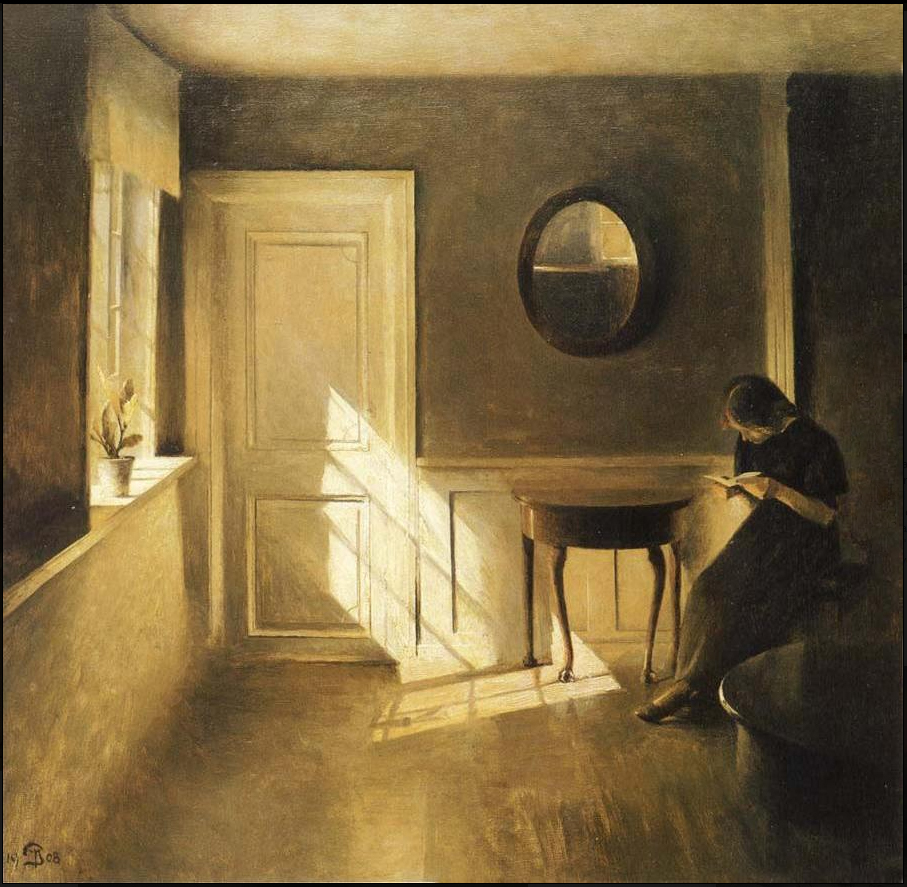 Peter Vilhelm, Girl Reading a Letter in an Interior, via Plum leaves

I’ve never been placed on bed rest during pregnancy, but I know plenty of women who have. The idea of lying in bed all day sounds at best like a free pass to be unconscionably lazy, and at worst insufferably boring, not to mention exceptionally frustrating to not be able to do anything for myself or my kids. But it would seem that it’s actually much, much worse than I imagine. In this essay, Alexandra Kleeman offers a highly detailed description of what happens to her body during her five days on bed rest. And it sounds excruciating.

By the third day, I found myself thinking that something had gone wrong inside my body, that there was something besides the experiment harming me. What else could explain how unwell I felt? The muscles of my neck and shoulders were alternately sore and numb; my legs hurt when I rested them against each other and ached when they were apart; my heart raced when I turned from one side to the other. I felt sad for no good reason, unfocused but undistractible — I couldn’t seem to get my mind off how I felt, but I was unable to bring the experience into sharp enough relief to analyze it. It’s more difficult to think when you’re horizontal: alertness comes in plains and troughs rather than in peaks. None of my thoughts had any lift to them.

Kleeman makes a convincing case against bed rest, or at least a case for more stringent scientific scrutiny of its benefits. She makes it sound as if this “rest cure” is merely an artifact from the medical practices of long ago—which ceased being prescribed for men after World War II—a paternalistic leftover from when nervous women were advised to stay in bed, eat meat and milk, and avoid any form of mental stimulation: “The aim was to produce a more resilient woman by cushioning her systems with blood and fat, and to make her psyche resemble the stillness of her outer flesh at rest rather than the mercurial, reactive processes of the womb.”

It’s not just that Kleeman can’t find evidence that bed rest improves the outcomes of high-risk pregnancies, it’s that it may in fact do more harm than good. The way she expertly and effortlessly combines personal essay with medical research and history reminds me of Eula Biss’s recent book On Immunity. — Olivia

Almost three weeks has passed since the time changed and I’m still not over it. As soon as it gets dark I think, “Well, that’s it. I need to go home, put on my sweats, and not do a single thing until bedtime.” And it’s only going to get worse–I live in Pittsburgh where it gets cold and stays cold. I keep asking myself: how do I adjust?

So I was drawn to “The Great Surrender,” Amanda Fortini’s essay about being powerless over nature. Fortini details how she’d always been “indifferent” to nature–she was a mall rat as a teen, and has lived much of her life in cities such as Chicago, New York, and Los Angeles. But a few years ago she moved to Montana and it’s changed her relationship to nature. When she first moved she was in a “near constant state of awe.” But, she says, it’s more complicated than a shift to being a nature person:

If this seems like a story about a city person who finally becomes aware of the planet she has always lived on, that’s only partly true. It is, on a deeper level, a story about someone who prizes a certain mastery of her environment—a control freak, if you must—coming to terms with the reality that great swaths of life are beyond our power to dictate, and that this is terrifying and constraining and liberating and exhilarating, often all at once. It’s a story about how there are still some places where nature is so extreme and dramatic that it persists in pushing through the cracks, forcing you to obey its rhythms, and not the other way around.

So Fortini’s answer to my question of how to adjust seems to be: don’t. Because when I ask how do I adjust, aren’t I just asking how do I bend nature to my will so that I can keep acting and feeling the way I did before the time changed? — Rachel

Walking on the beach, I watched a teenage girl stop to take a selfie. While I might normally be annoyed or roll my eyes, in that moment I saw something – a body and face, not quite adult, not quite child – wanting to be seen, wanting to take up space. The selfie has been mocked and denigrated as vain, even somehow impolite (selfies at inappropriate places, for example), but Syme asks the reader to see the selfie as a different kind of liberation, more like a graffiti tag, a sign that we were here.

She makes this a feminist issue – that teenage girl I saw is used to being looked at, but with a selfie she is allowed to make her image the way she wants to be seen. No longer object, but also subject, the selfie, according to Syme, is an ambitious quest to be remembered and not erased. It’s also a challenge to authority, to who gets to decide who’s important.

Here’s how Syme analyzes women being mocked by male announcers for taking selfies at a baseball game:

The announcers’ disgust for that simple act, for a group of women looking at themselves instead of at the men on the field, continued the bait-and-switch that men have been pulling on women for eons: pretending they are madonnas until the moment it is convenient to call them whores. These young women were worth looking at when it suited the men in charge, but as it became clear that their love for each other trumped the love of the game, the men with microphones started to crumble. They did what any player does when their team is losing: they shook their fists and raged. And this rage sounded a bit like a death rattle.

Aren’t women always being accused of vanity, even as the world demands it? I think about the women my age who feel forced to look younger and the young women who know the value of looks but often wish it were different. And teenagers, especially teenage girls, are mocked and derided as obnoxious and narcissistic. They are “mean girls,” callow, and selfish – also victims, pawns and Lolita-like fodder for other people to reflect their own desires.

Watching that girl, I could see her trying to take some power back, reaching out for connection, asking people to admire her grace and artistry, the fact that she wasn’t a woman yet, and that was okay. Similarly, Syme’s work asks the reader to do the same.
—Jessica