3:35 AM. I’m cross-legged on the bed, a C-shaped pillow atop my thighs and knees, my newborn son atop that, nursing. Near my left hand on the bed, my iPhone.

A smartphone is the perfect accessory for breastfeeding. Or for any contemporary mothering task, actually, which leaves one hand relatively free. While feeding my son at night, I loiter in the anterooms of Google, holding out like a lantern in front of me the fragmented questions that the day has prompted.

How to shower when alone with baby, I type into Safari. 21,500,000 results flutter back at me, a ticker tape  parade of anxiety and confusion. My favorites are the forums, rife with desperation, spelling mistakes, and a slew of unfamiliar acronyms. DD, dear daughter. DH, dear husband. EBF, exclusively breastfeeding or fed.

On one page, this bolded plea:

Normally when I’m home alone with our 2 week old, I have my mom come over to watch her while I take a shower. Well, she’s not available today and I don’t know what to do!!!

33 replies follow, many of them recommending to put LO in his or her bouncy seat and to bring it into the bathroom. Some recommend the bassinet, or say that mom should shower at night, when DH is home. Inevitably, one commenter says how ridiculous this question is, that of COURSE she should shower and let LO cry. Little one.

I always notice the date on these conversations. The question is dated 1/29/2011. I think about that mom now, and imagine her with her daughter, who would be five. What would she think, if she were confronted with this image of herself so newly into motherhood? The Ghost of New Motherhood Past? What advice would her current self offer to her sleep-deprived, unshowered, raw-nerved, and younger self?

Those 33 responses reach for me now, surrounded by the dark of my bedroom, my three-week-old son swallowing and breathing beneath me. The women who wrote these comments time travel to meet me here, in 2016. They shove back the shower curtain, hair in wet licorice strips down their shoulders, dripping as they step onto the tiled floor just to tell us how it can be done, how we can be clean as we were once, back when we unthinkingly and easily cared for own bodies.

That all of this happens in the dark is important.

For me, and so many other moms I know, a dependence on one’s smartphone sharpens during pregnancy. When I found out I was pregnant, I downloaded The Bump app, checking each week to see what fruit—a grape! a lime! an avocado! and then, terrifyingly, a pumpkin! a watermelon!—my growing baby resembled.

I’d never been a symptom-Googler. I’m practically the opposite of a hypochondriac—someone who frequently, annoyingly resists sickness by denying it (“I don’t think it’s a cold, I might just be tired,” and then “It’s just a cold, not a sinus infection”). But during pregnancy, there was so much to know. So much to Google!

I’d regularly taught my university students about using smart research strategies, isolating keywords and using Boolean operators (“and,” “or,” and “not”). Now, I abandoned all of my own sound advice, and indulged in Googling unwieldy phrases and clumsily-worded questions—it felt MORE indulgent that way, more luxurious.

It began with inquiries into what I was allowed or forbidden: “Vitamin C cough drops during pregnancy” or “Can pregnant women have vegetarian sushi.” More than ever, I wanted to do this—pregnancy—RIGHT. Never a germaphobe previously, I felt my Virgoan, rule-following tendencies taking the lead. I gave up coffee for the first time since I was thirteen (for the first two trimesters, at least); I worried about the cleanliness of soft-serve ice cream machines and the cross-contamination of knives that might slice into avocado rolls.

Occasionally I would Google symptoms. “What does heartburn feel like.” “Why do my boobs hurt so much while pregnant.” Why, Google, WHY? Dr. Google, fortune teller Google, wise neighbor lady Google. Is what I’m feeling normal, I wanted to know.

But what I wanted to know also went beyond that. Why does such-and-such happen, Google? Am I allowed to do x? If I do x, am I a good person or a bad person? What events in my childhood cause me to crave x? The way I verb, is this how other people verb? Googling while pregnant is like Mad Libs meets therapy, thousands of other people dialed into this private, neurotic space via speakerphone.

There is the self that feels during pregnancy, the individual, and then the self as host (as in party, not parasite). For the first time, a split between the experiences within my own body and being. Curled up inside me, curiosity. Mystery. And fear about the very real consequences of any minor act. And just under that, the agonizing worry that my not knowing a detail would hurt the new, soft-skinned fruit I had somehow been entrusted with nurturing.

Weeks before I have my son, one of my friends texts me a representation, in emojis, of her two childbirth experiences. For the next few days, I can’t stop looking at this and laughing. 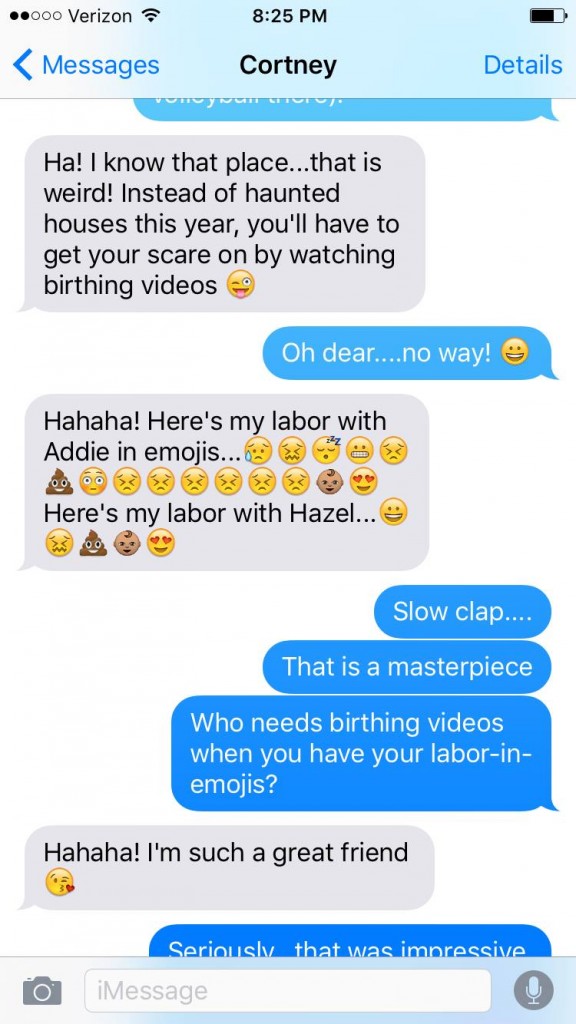 As a new mom, I text my mom friends with questions, treating them as a search engine. There is an immediacy and lack of self-consciousness to the questions I toss to them, to the answers they toss back. What kind of bottles did they prefer? Which nursing pads? Which nipple cream? How did they shower when their babies were first born? What did they do to recover from labor, to bring their body back to itself?

I send pictures of my son to my friends, to my mom, to my sister, to my dad (who views them on his flip-phone). When I gaze down at my son while he nurses, happy, half moon-eyed, I keep seeing him as a kewpie doll.

I Google “kewpie doll,” and discover that the dolls were named after Cupid by their creator, Rose O’Neill, a women’s rights activist in the early 20th century. Down the rabbit hole of tabs on my phone, tap, tap, tap. I send my mom a screenshot of a Kewpie doll, and then a photo of my son, and the text, “Compare/contrast.”

While my son sleeps in my arms, I look at his face, his pillowy, cherubic cheek, his eyelashes with their one extra-long lash per lid. I open the camera app on my phone, look at his face again that way, and take a photo. While he dozes, I stare at photos of him. The better to see you with, my dear. 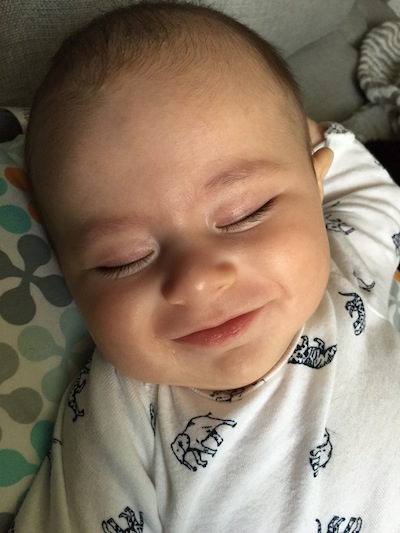 With a flick of my thumb, I scroll through the gallery on my phone. I slide the photos from left to right, slipping from past to present to future. I’m dealing myself a stack of playing cards, taking from one pile to make a new hand. Here is a photo of my son from yesterday. Here is my just-born son cocooned in the ubiquitous duckling hospital blanket, the ubiquitous pink and blue cap. Here is me, pregnant, a selfie I took in the full-length mirror of the grocery store bathroom. Here is the 3-D ultrasound of my son’s face, one little eye open, hand squished against his cheek or cheekbone. Here are me and my husband before the Sufjan Stevens concert, where we listened to his beautiful love songs to his stepfather and dead mother, our teeny tiny embryo in tow in utero. These days are full of images, of me learning and memorizing the daily-changing landscape of my son’s face, of trying to keep a piece of this surreal time when I feel myself blown apart and reconfigured, broken but whole, full of dissolving stitches and leaking tears, milk, questions, memories. Compare/contrast.

Looking back at my friend’s string of grimacing, worried, and heart-eyed faces now, while my 11-week-old son naps in his swing, I think how apt and nearly poetic the images are. Embedded in this strand of little yellow faces in a gray rounded text box is honesty. Honesty about pain and its duration, emotion toward the body’s response to loss of control and toward the new being that our bodies build and yield. Here in the intimate cave of our hand-clutched screens, here are the hieroglyphics that we lovingly leave one another and ourselves, cartoonish and reassuring and utterly vulnerable.

Hannah Stephenson is a poet, editor, instructor, and new mom (to Henson) living in Columbus, Ohio (where she also runs a literary event series called Paging Columbus). She is the author of In the Kettle, the Shriek (Gold Wake Press), editor of New Poetry from the Midwest (New American Press) and The Ides of March: An Anthology of Ohio Poets (Columbus Creative Cooperative), and a poetry and arts blogger for The Huffington Post. Her writing has appeared in publications that include The Atlantic, 32 Poems, The Journal, Sixth Finch, Poetry Daily, and The Nervous Breakdown. You can visit her online at The Storialist (www.thestorialist.com).

While riding my university shuttle, I used to stare at women’s hair. They were mostly young white women like me, who would sit in rows facing each other at the front of the bus, compulsively checking their phones.