Why did I write it down? In order to remember, of course, but exactly what was it I wanted to remember? How much of it actually happened? Did any of it? Why do I keep a notebook at all? – Joan Didion

Were it ten or twenty years ago, these notes, perhaps written on scraps of paper, would represent all that held together my life experiences at the age of 31. However, these days I walk the city taking notes on my phone, recording sounds and snippets of conversations, taking photos of graffiti and trying to hold onto moments and memories, small bits of things that give me meaning.

He stood in the desert night, an expanse of stars framing his turbaned head. I stood in the grass in front of the renovated Cineteca Nacional in Mexico City, a pool of dark sky and pollution-smothered stars somewhere above. White teeth in the dark, a Cheshire grin spread shyly across his face as he pointed to his cave, as he discussed how, after fleeing the Taliban, he had found it, the most luxurious cave. I looked up at the outdoor movie screen, and I wanted to hold onto that feeling, to the happy man in the desert who loved his cave, who thought it was luxurious not because there was any judge of best caves, but simply because he had found it and made it his own.

I typed his words into the notes on my phone and continued on my way. Walking past the Cineteca Nacional was part of my daily route to get from my apartment to the metro. Along the way, I collected words and images, storing them away for the lean moments, the ones when writing seemed futile. I hoarded to remind myself that there were always stories to tell.

I can’t remember who said this. It could have been any of the five million people who rode the metro daily, their bodies plastered to mine as we sweated collectively through our clothes. It reminded me of the day I fainted on my way to work, my limp body supported by the pressure of the flesh of others.

Angel eater was my translation for the Portuguese word for a sugar daddy, an old guy who ate up sweet young things like tapas. A friend from Brazil called me on Skype, and, upon hearing of my younger boyfriend declared me a papa anjo. I loved the image of devouring angels, imagined myself with a mouth full of wings.

He held out lollipops.
“Strawberry or cherry?”
It was my first day of work, and I sat behind my desk and stared at him in disbelief. He put the cherry one on my desk. I hesitantly reached for it and put it in my drawer.
“You aren’t going to eat it now? If you want more, just stop by my office. I have lots more.”
This was my first interaction with César, a fellow researcher where I worked at the national university in Mexico City. He had a great round beer belly, the thinning hair of a 50-something and a booming voice. Eventually, my desk drawer would overflow with melting candies, gifts delivered by César along with advice about how to be más guapa.
“You should dye your hair darker. Don’t you think? Why don’t you wear more skirts? I think you should wear heels. Why don’t you wear makeup every day?”
He never had a shortage of advice. I always had a shortage of skirts. 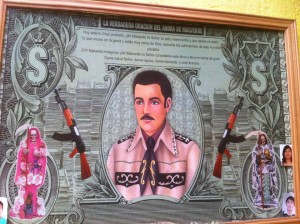 This was probably only one place on earth where these two hung out – the Church of Holy Death, la Santísima, in Tepito, a rough area of Mexico City where everyone told everyone not to go. Out front, in a glass case, a skeleton of Holy Death was dressed in a red sequined shroud. Inside, Holy Death stood with a scythe, his body covered in a gold lamé robe. He wore a golden crown and a belt made entirely of tiny golden skulls. Nearby, someone had hung several Christmas decorations, red and green cut outs of Santa Claus and his sleigh. On the wall, there was a framed drawing of the narco saint, Malverde. He was always smoking a cigarette and had a fist full of cash, always US dollars. In this case, only his torso was visible, and automatic weapons and Holy Death flanked him on each side. The image of Holy Death to his left wore a fuchsia robe blooming with pink roses and the one on his right was dressed in a robe made of dollar bills. The edges of the frame were decorated with a few photos, the faces of believers. As I entered the Holy Death gift shop, a fat black cat ran by and I stooped down to pet it.

I traveled with a group of architects and urban planners. We took the metro to the end of the line—two hours; then one bus, then another—one hour; and ended up in an expanse of empty dust lands so far north of Mexico City that we were in another state, Hidalgo. When the wind blew, it whipped up dust that permeated our clothes and filled our eyes with grit. In the distance, a solitary man built a small room out of cement blocks. Other makeshift concrete and plywood slat houses in various states of incompletion dotted the landscape. We wandered in and out of dust clouds, seeking out squatters, asking them about their lives. Many of them spent six or more hours a day on public transport to get to work in Mexico City. Their skin was patched with redness from the constant irritation caused by dust. There was no running water. They lived on invisible borders, clinging to a life most of us couldn’t even imagine. 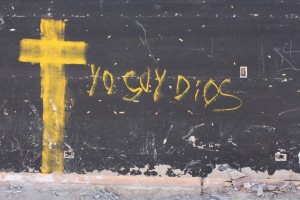 His phone roared like a cross between a wild cat and a revving car engine, and it rang ceaselessly from 7am-4pm. Lucio and I rode across Juárez like bandits, changing direction depending on the phone call and the importance of the day’s news.
“Símon, andale, sí mero, los pinches malandros,” he said, laughing as he responded to a call about a bank break in.

No matter the crime scene – suicides, car crashes, a protest organized by mothers of disappeared children – Lucio and other photojournalists ended up carrying on a constant conversation about soccer that spanned the entire crime scene geography of the city. “Los muertitos,” Lucio called them with fondness as he talked on the phone. And it was genuine, the fondness for the living and the dead who populated his city.

As Luz ran the stop sign, I sat in the passenger seat and watched the whole thing in slow motion and thought, “My car, hungry like me, living off midnight.” The thought didn’t make much sense to me at the time, but I wrote it down. Maybe I thought it because of the chance of death, or because, like all things in Mexico City, everything seemed so precarious that the only option was something impossible like living off midnight. I looked over at Luz.

“After 11pm women don’t have to stop at stop signs as a safety measure,” she said. Due to the number of carjackings and kidnappings.”

I thought, “I’m going to write about that, the moment at 11pm when women across the city run stop signs as if there were no other way of life.”

All these notes are about the struggle to find and make meaning, about mortality, space and memory, about finding a home, a cave of my own. I took them in the wake of the end of a nine-year relationship, at a time in my life when everything seemed precarious. I have a recording of Lucio, the crime scene photographer, talking about “los muertitos.” In Lucio’s voice, you can hear how much he loves his work, even though it involves daily encounters with death. I look at my photo of Santa Claus and Holy Death side by side, and I wonder, “In the scheme of things, does worshiping Holy Death make any more or less sense than worshiping anything else?” Like squatters living on invisible borders, we all try to construct something that will protect us or give us meaning, no matter how fleeting it may be.

Alice Driver is the author of More or Less Dead: Feminicide, Haunting, and the Ethics of Representation in Mexico (University of Arizona Press 2015) and the translator of Abecedario de Juárez, a collaboration between journalist Julián Cardona and artist Alice Leora Briggs that explores and maps the new language of violence in Mexico. Driver is a columnist at Al Jazeera English where she writes about activism, human rights, and women’s rights.

Amy Wallace’s “A Very Dangerous Boy” in GQ The theme of this week’s reads for me was Nazism, or rather the insidious way Nazism…