Editor’s Note: Even in our hyper-connected age, it can be pretty easy to fall into the habit of reading the same writers in the same publications. One of the many things we’ve been shown running Vela is the breadth and diversity of female voices. We editors have been asking: how do we get out of our literary bubbles and find new writers?

Welcome to Bookmarked, a new column where we ask some of our favorite writers and editors who they’re reading. The idea is to branch out into different genres, and highlight emerging and under-celebrated women writers.

Our first installment comes courtesy of Elissa Bassist, the funny woman behind The Rumpus’ Funny Women column. Below, she shares five of her favorite female humor writers:

I have been asked to write short blurbs on humor and satire writers. I have been asked, most probably, because I inconsistently edit a column on TheRumpus.net called “Funny Women”—a space for persons of femininity to submit and publish original short-ish humor writing.

So far I’ve joke-and-word-volleyed and had the pleasure of publishing around 100 humorists, both byline-less and jaded pros who’ve written—and published!—books. Due to what I perceive as fairness, I’m leaving out all of them here because they’re here.

In no particular order:

1. Did you know poets are comedy’s best-kept secret? Poets? Poets! Poets like Melissa Broder, who writes with high literary merit and profundity, and is so darkly clever and funny she makes me LOLACTUAL. This skill is as phenomenal as resurrecting the dead, although scientifically more impossible. 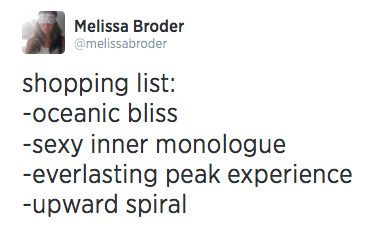 Her devotion to existentialist dread, regular dread, egos, vibes, imaginary people, disappointing selves, meaninglessness, nothingness, loneliness (you get the point) is sweeping, unpredictable and relentless, in a scorned-woman type of way.

Melissa the Poet’s Twitter acumen shouldn’t be too surprising considering poetry, Twitter and comedy all fall into the epigrammatic genre. Read some of her poems online, and purchase her three poetry collections, Scarecrone, Meat Heart and When You Say One Thing But Mean Your Mother.

2. Despite being the human equivalent of a Lisa Frank rainbow, Chelsea Clarke is a wicked satirist who dabbles in fierce mockery on Reductress, the first and only premier satirical women’s news web magazine (similar to The Onion) that “tells the stories of real women, written by real women, for other real women who like to read about women.” Reductress was co-created by Beth Newell and Sarah Pappalardo to parody “woman-focused marketing and the consumer identity built around it,” by “taking on the perk and patronizing tone that saturates online media today.” Emoticon. (The site’s recently relaunched with expanded written content, original videos, a new female-friendly look and women-inspired comedy events around New York.)

Check out Chelsea’s smart, sassy, empowering, inspiring, informative, transformative, questionable, unasked-for, svelte, Zagat-rated articles that will put you in touch with your Highest Self, such as:

“Maybe You SHOULD Smile: Cat-Callers Who Make Some Good Points” (“As you strive to be your better self, can you stop and ask, ‘Am I working it harder than I did yesterday?’”)

“Fuck It: A Guide to Wearing Yoga Pants at Weddings” (“Sometimes the most attractive thing one can do is admit defeat.”)

“Real Life’s ‘Like’ Button: Learning How to Smile with Friends” (“Smiles are the things you sometimes see in vacation photos of people who go outside.”)

“From Our Sponsors: New Tampax Deep White™ Vagina Whitening Tampons” (“Shine from the inside out.”)

What impresses me is Chelsea’s playfulness combined with her disdain for contemporary brainlessness. Her style, like spring fashions, is fun and dangerous and revealing.

She also has a non-verbal cameo on Broad City, which if my heart gave out Emmy’s…

3. Celeste Ballard does mash-ups—a comedy writing gold standard—where she deftly splices two things that don’t belong together—[ex-boyfriend joke here]—usually one highbrow and the other Miley Cyrus, like “Cormac McCarthy Describes the Video for Miley Cyrus’s ‘Wrecking Ball’” and “We Can’t Stop” on The Hairpin. Both evoke smiling wonderment, as does her latest “Overheard at my Funeral” with lines like: “Her last words? It’s bittersweet… Her last words were, ‘Don’t let the last things I say be ‘YOLO.’ And, ‘It’s not that she didn’t understand jazz. Jazz didn’t understand her.'”

Celeste is also a writer and producer at the comedy network Above Average. Right now she’s working on a web series for POPSUGAR—which recently unveiled new original programming “that delivers content women love”—called Seriously Distracted, a “comedy series about a group of women who find themselves stuck at the bottom rung of a New York PR firm that is always one signing away from making it big.” No matter your rung, Celeste’s jokes will reach and delight you.

4. Cirocco Dunlap and I have a secret friendship only I know about. I read her stuff on the New Yorker.com’s Daily Shouts, and then I’m depressed for two hours (minimum), at which point I transition into deep contemplation of drastic life overhauls to make my writing as hilarious as hers. She’s endlessly inventive in pieces like:

“How to Deal with a Breakup by Someone Also Going Through a Breakup” (“Breakups hurt. It hurts now and it will probably hurt forever.”)

“A Letter from Me in the Future to Me in the Past” (“So the zombie apocalypse came and went . . . but the big news is I have a boyfriend!”)

“The Sims You Left Behind” (“No one has eaten or used the toilet for eleven years, but we cannot die.”)

(N.B. Sara Levine, a funny + witty + clever novelist who wrote Treasure Island!!!, turned me on to Veronica Geng. “My Mao”—about a love affair with Mao Tze-Tung—is tragically behind a paywall, but if you have a New Yorker subscription, then you can read it here. I will strain myself recommending Geng’s collected work Love Trouble Is My Business to any humor writer or reader or person with a pulse.)

5. Elissa Washuta’s upcoming My Body Is a Book of Rules (Red Hen Press), is a serious and often harrowing memoir, and it’s also one of the funniest books I’ve read all year. In 200-ish pages about depression and mania, mood-stabilizing medication, sexual violence against women, ethnic identity, the difficulties of growing up and being in the world, and more, I’ve penciled “HA HA HA” at least once per paragraph. When I first read David Sedaris in my late teens, I remember thinking, Comedy makes tragedy easier to swallow? (I added the question mark because I was full of self-doubt at the time.) At the 2013 New Yorker festival George Saunders underscored the irresistibility of humor when it comes to tough topics: “Should I be funny or serious? Yes.”

Elissa Bassist edits the Funny Women column on The Rumpus. Visit her website for literary, feminist, and personal criticism, and/or follow her on Twitter. Elissa is single and has no pets.

One day, in late October, my son and I left his Mexican preschool and wandered up the Calzada toward Morelia’s pink stone aqueduct.